NXNE is back! Following a COVID-induced hiatus, the beloved festival – which first launched in 1995 –returned to bars and venues across Toronto from June 14th to 19th. Showcasing artists from a myriad of locations and genres, the revived fest was a welcome kickstart to summer and an opportunity for music-goers to enjoy up-and-coming musicians while embracing a return to live sound.

Quip was thrilled to be out for the fest – here were some of our favourites!

Originally from Waterloo (ON), the up-and-coming dark wave-indie artist played a Wednesday-evening set, one of two at this year’s festival. Together with a sunglass-clad guitarist, FRANKIE FLOWERS offered a psychedelic performance that harkened to Billie Eilish – both eclectic and engaging. The crowd was eager to engage with a slowed version of The Smiths’ “There is a Light That Never Goes Out”, along with FLOWERS’ singles, “GIRLS WITH BOYFRIENDS” and “KISS ME LIKE THE WORLD IS ENDING”. Imaginative and cool, FLOWERS weaves personal anecdotes– including heartbreak – through her music, making it both personal and poetic. Stay tuned, folks – FRANKIE FLOWERS is one to keep your eye on!

The North Sound, comprised of real-life partners Nevada Freistadt and Forrest Eaglespeaker, joined NXNE from Saskatoon (SK), playing a Wednesday night set at The Dakota Tavern. Winners of the Saskatchewan Music Award for Indigenous Artist of the Year, as well as nominees for three Saskatchewan Country Music Awards, The North Sound is making waves across the roots-rock genre. Their NXNE performance was both soft and powerful, with the combined vocals of Friedstadt and Eaglespeaker creating poignant melodies and gentle harmonies. Eaglespeaker shared some inspiration behind the music, which included his Blackfoot identity and traditions from Treaty 7 Territory, as well as his father who worked in the trades. Playing a variety of songs, including “This Land” and “Between the Ditches” off their latest album, As the Stars Explode, The North Sound’s tracks are both haunting and inspiring, taking on pressing social issues and the human experience. If you haven’t already – give them a listen. 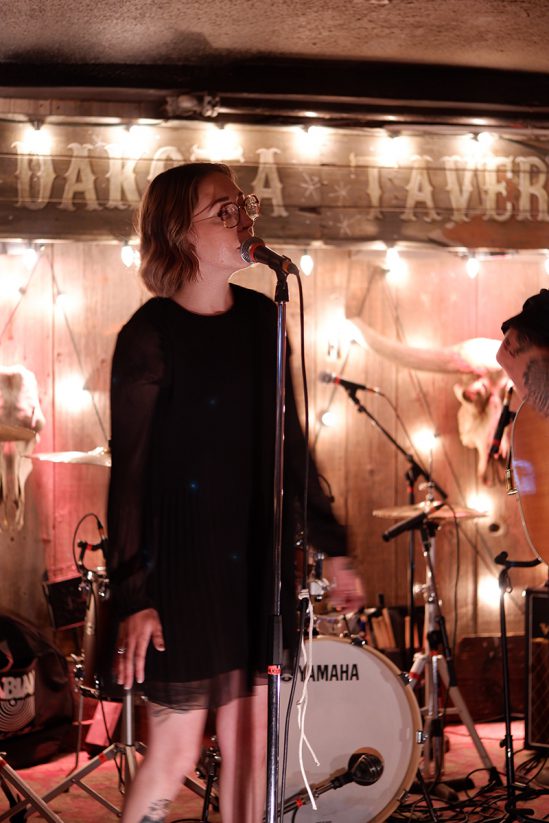 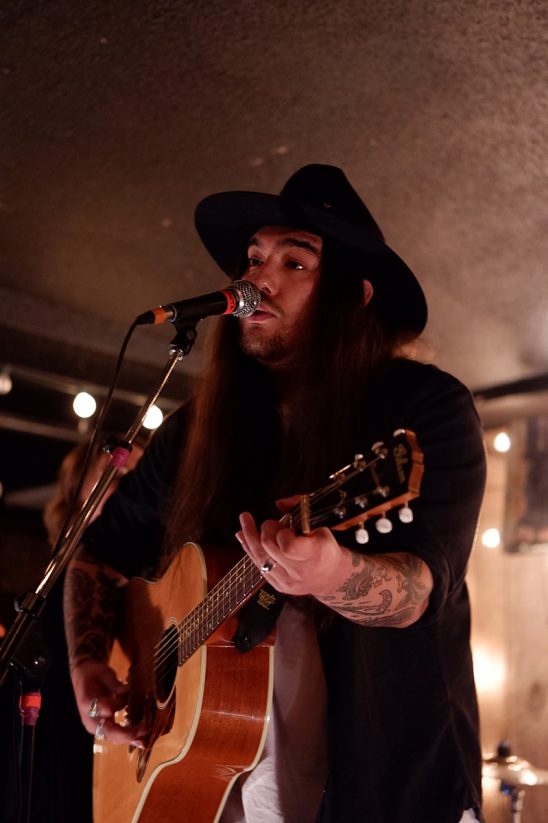 Taking over The Cameron House’s backstage on Thursday night was Toronto-based singer-songwriter, Kyara Tetreault, who also recently performed as an avatar on Fox’s new singing competition, Alter Ego. In fact, Tetreault noted that her NXNE show was her first one back in the city since appearing on the show. Together with her guitarist, Tetreault played a smoky, soulful set that included songs “Gold,” “Pick Up and Go (Rolling Stone),” and “Rag Doll,” off her 2021 EP, self titled. Tetreault also delivered beautiful versions of Daniel Cesar’s “Japanese Denim”, Amy Winehouse’s “Love is a Losing Game”, and Blackstreet and Dr. Dre’s “No Diggity” that left the crowd gently swaying to interactive sing-alongs. Gifted with vocals that resonated and reverberated throughout the entire room, Tetreault is one to keep an eye on – whether in avatar form or not.

Making the journey north from New York City, the indie-pop duo – Late Night Thoughts – took to the stage of the legendary Horseshoe Tavern on Thursday night with an upbeat performance that included a cover of Van Morrison’s “Brown Eyed Girl” along with songs from their latest EP, Bridges & Tunnels, singles, and past EP, Moonlit Memories. Made up of friends, Michael Harlow and Brian Rauch, who shared that they met at Brandeis University, the duo offered a heartfelt performance that contended with the crowd’s volume. Noting that this set was their first in Toronto, Harlow and Rauch are entertaining and affable performers that put on a folk show reminiscent of campfires and college bars. An upbeat, catchy performance – worth catching the next time they’re in town.