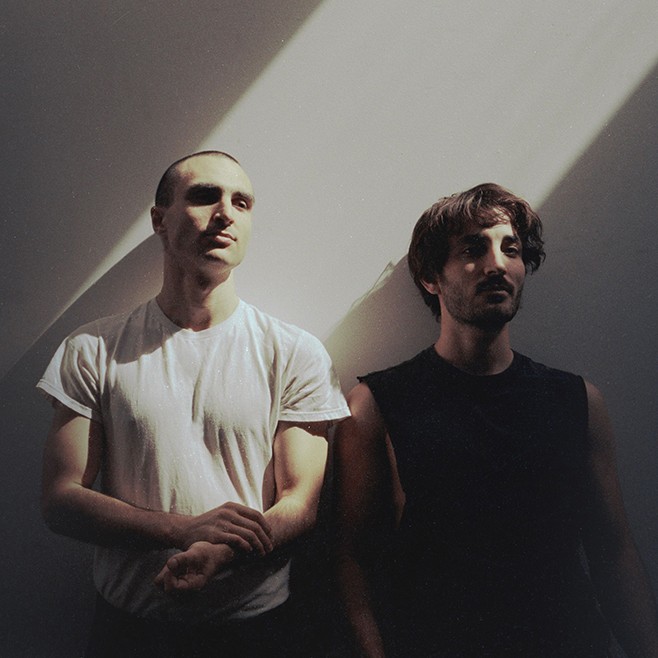 Montreal’s Centre Phi felt cosy this past Friday evening, as small groups of sharply dressed individuals filtered their way into the nearly pitch black theatre for the launch of Majical Cloudz newest LP Are You Alone?

The vibe overall was mellow, the bar served a variety of cocktails with kitschy names that did not disappoint in taste.

As local openers Homeshake started playing, the crowd’s attention quickly moved away from their drinks and turned towards Peter Sagars and his lo-fi, funk inspired rhythms. Sagars lyrics are melancholic, and his velvety guitar riffs ebb and flow like water alongside his jazzy drums and moody bass. He is definitely at home on stage, and the performance proceeded with little noticeable hiccups.

Without much hesitation between performances, Montreal natives She-Devils floated on stage. Fronted by the captivating Audrey Anne and accompanied by Kyle controlling the sounds, She-Devils are gaining North American prominence for their dreamy and innovative live performance. The band does not craft a linear narrative with their music, but instead they seek to engage with the liminal space that exists between melody and raw, pure sound. Audrey Anne’s vocals exerted a delicate whimsy, blending sweetly alongside Kyle’s multi-layered electronic harmonies. The duo has been making their rounds on the MTL show circuit over the last year, and their enigmatic live performance is a true testament to their potential as artists who will continue to grow and inspire.

Majical Cloudz needed little introduction, as front man Devon Welsh is an impeccable showman known for his ability to please a crowd. Welsh paced the staged with a jovial energy, rambling repetitive salutations in the direction of the audience and announcing the start of each song. Matthew Otto stood behind him in place, quietly mastering the necessary buttons that allowed the pairs spellbinding rhythms to flood the room.

At one point, Welsh casually joked “Everyone can sing along — no, I’m not really asking that.” Whether he was kidding or not, the crowd tried their best to keep up with his ethereal vocals, often falling slightly short.  At the onset of the track “Silver Car Crash,” his robust voice instantly halted two loud and chatty persons, leading them to abandon their convo in order to sing along.

Throughout the show Welsh demanded attention, he paraded around the stage with vigour—he is theatrical and unapologetic about his theatricality. His lyrics deeply engage the audience, they are crafted simply and honestly to convey universal emotions: lust, love, pain, and confusion.  Two crowd favorites were “Control” which was sensual and moody, and “Downtown” which was wistful and compelling.  Towards the end of their set, Welsh threw roses into the audience, who invited them in with open arms.

At times, it seemed as through the crowd didn’t quite know whether to giggle at Welsh’s clowning, or if they should stare silently, in awe. Regardless, they were captivated, blissfully enveloped in Majical Cloudz performance.