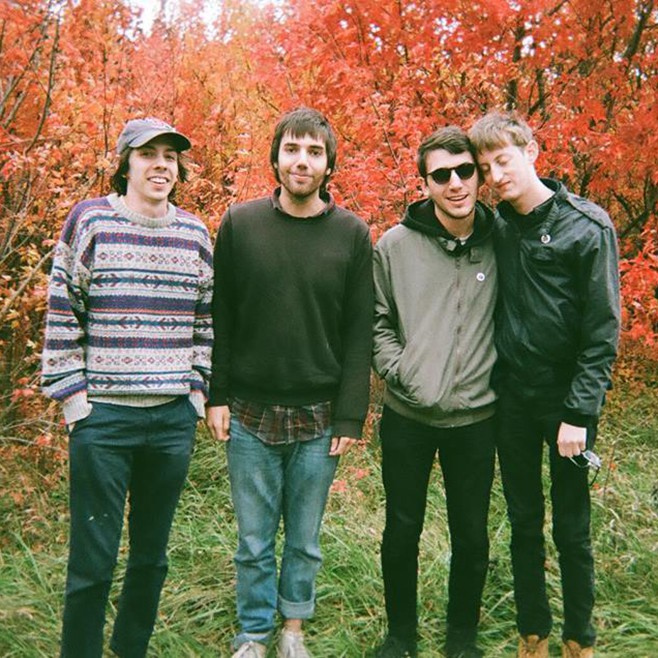 Mississippi Studios welcomed LVL UP into their space this past Monday. The venue is connected to Bar Bar and has the feeling of a practice space or basement complete with Persian rugs underfoot to deaden sound and old marching drums for added aesthetic.

This was my first time seeing LVL UP live and I learned that both guitarists and the bass player (Dave Benton, Nick Corbo, and Mike Caridi) all sing and write lyrics. Their vocals can be pretty hard to discern from each other when enjoying them via audio only.

While their set started off somewhat slow, it gets more and more intense and powerful as they rifle through their set list, which mostly focused on songs from their latest project, Return to Love. This is their third album and their debut via SUB POP. The Brooklyn quartet has been releasing albums together since 2011 but Return to Love has received the most attention. How lucky we are that SUB POP decided to pick these boys up because they were on the verge of calling it quits. Return to Love made it onto my top albums for 2016 so I would have been lacking some serious distortion without them.

As the set continued the boys began to lose themselves: complete with looks of determination and concentration on their faces. Constantly tuning and popping down to check and adjust pedals. I’m 5’4 and was standing in the back so from my view it looked like an indie version of whack-a-mole.

LVL Up has been doing their thing for a while now. It’s great that they’re getting so much recognition for this album. Which has quite a few references to angels, God, and Roman candles. Perhaps these Brooklyn boys might have grown up in a catholic household. Childhood can be such a great influencer of art, don’t you think?

The band also had a donation jar for Make The Road, a New York organization that helps immigrants with any type of legal council they might need. They made sure to mention it towards the end of their set, which was closed with Hidden Diver (save for the encore).

LVL UP has a big sound and they do a great job both, in the studio and on stage, to craft it. Such attention to detail is what makes a band with seemingly lo-fi indie qualities explode (via pedals, overlapping guitars, and existential lyrics). I can’t wait to see what comes of their craniums next. Cheers boys.