Earlier this week Michael Kiwanuka played a weekday show in Toronto’s Phoenix Concert Theatre. The tickets were gone early and while the Phoenix is not a venue that typically has VIP tickets today was the night even those seats were occupied. The dark venue was packed door to door and nearly everyone knew every word to every song.

Love & Hate is that kind of album, Pitchfork called Love & Hate “A sprawling soul opus full of longing and self-assessment”. This record is, in a way, Kiwanuka’s self-discovery. After spending some time being drawn into the likes of Kanye West and feeling lost in that crowd Kiwanuka joined hands with producer Brian “Danger Mouse” Burton (Gnarls Barkley, Cee-Lo Green, Broken Bells) for Love & Hate. The album drawing on the 60s and 70s soul sound was a huge success. It is emotional, honest, and raw, built on the base sounds of his acoustic guitar. 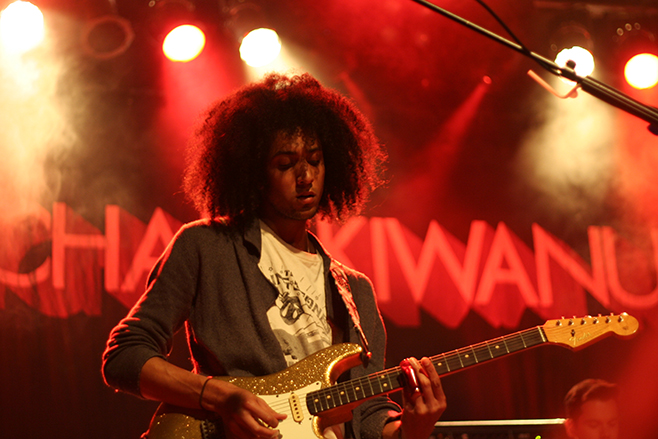 Joined on stage by a full band Kiwanuka opened the set with “Cold Little Heart,” this drawn out opening track enhanced by the wealth of the full band really set the mood for the night. Back to front, start to finish the crowd was engaged, dancing, singing and clapping along. The highlight of the evening was “Black Man in a White World,” a track in which Kiwanuka samples an instrumental Afrobeat sound while lyrically touching on his inner racial conflict: “I’m in love, but I’m still sad/I found peace, but I’m not glad.”

Paused by an occasional story, the performance was not perfect, Kiwanuka apologetically restarted a couple of times but the set did not suffer from it one bit. His honest and raw personality pulls the audience in. Love & Hate, much like his previous record, is a keeper and seeing it come to life is a special experience that can only deepen the appreciation of the artist and the album.